Consider her ways, and be wise...

I have a little finish to show and a freebie to share! Back in the summer, while I was searching for something else, I stumbled across this adorable little stitching ant freebie. Ants always remind me of these verses from Proverbs:


Go to the ant, thou sluggard;
consider her ways, and be wise:
Which having no guide, overseer, or ruler,
Provideth her meat in the summer,
and gathereth her food in the harvest.
~Proverbs 6.6-8

I spend my summers scurrying around trying to get as much done as possible--in ant-like fashion--so I decided to add the phrase, "Go to the ant, consider her ways and be wise" to the border of this design. I stitched this on a scrap of what I think is PTP Sand, using Caron Wildflowers Black Forest and Cardinal.

Speaking of being busy, I'm still working on my big sewing room rearrange. My work time has been pretty hit or miss because Mr. Wonderful has been on leave, and y'all know, it's hard to get stuff done in the house with a hubster under foot. The major part of the project is done, and I'm now down to those odds and ends that seem like small tasks, but that always end up taking nearly as much time as the big stuff. We had to cancel our trip to North Carolina because of Hurricane Florence, but we've rescheduled it for November, the tail end of hurricane season... and before blizzard season.

My head is swimming with thinking of all the stitching, finishing, and framing I want to do when I get the sewing room done. My goal is to have it done by the beginning of October. Wish me luck and stay tuned! 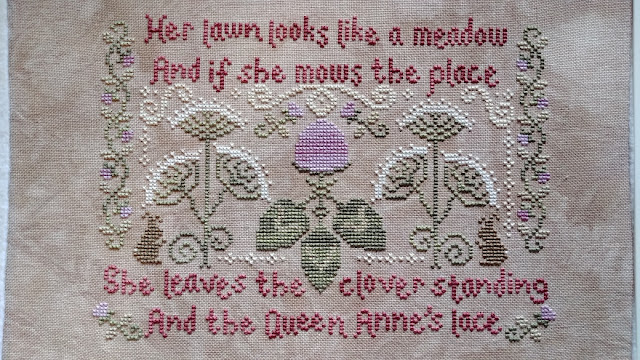 Clover and Lace by Misty Hill Studio, stitched on 28 ct. PTP Oaken. I hope my next update will be a finish!
Posted by Honeybee 9 comments:

Taking a quick break from the giant sewing room rearrange to share my new way to display my seasonal smalls. If you've been reading for a while, you're probably familiar with my seasonal baskets. Unfortunately, in rearranging the room, I had to give up the surface space where the basket lived. A few months ago I picked up this unfinished wooden dollhouse shelf at Michael's on sale and set it aside for some future use. My dollhouse was always my favorite toy when I was little, and I still have a soft spot for them. (My mom still has mine!) The dollhouse has become the new home for my seasonal smalls display. It now sits atop a bookshelf, taking up very little space, and it's easily visible. 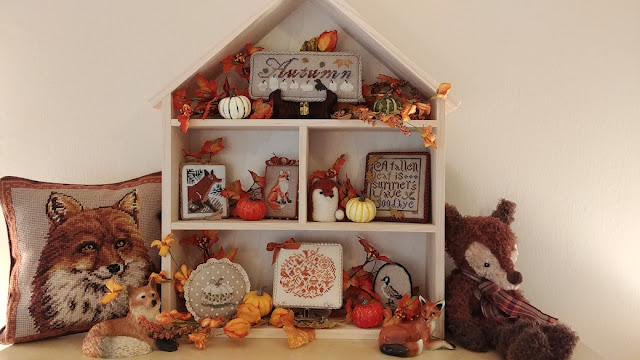 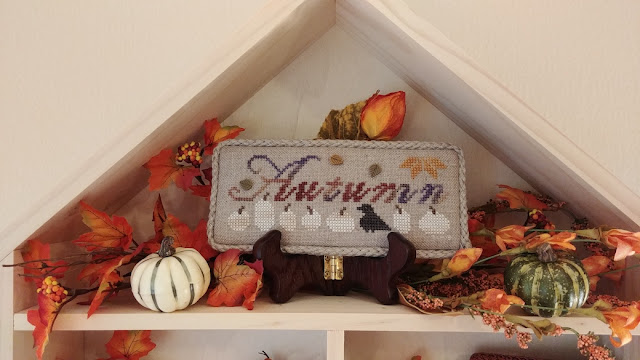 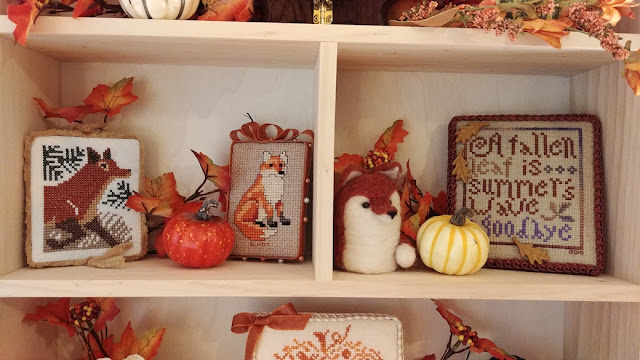 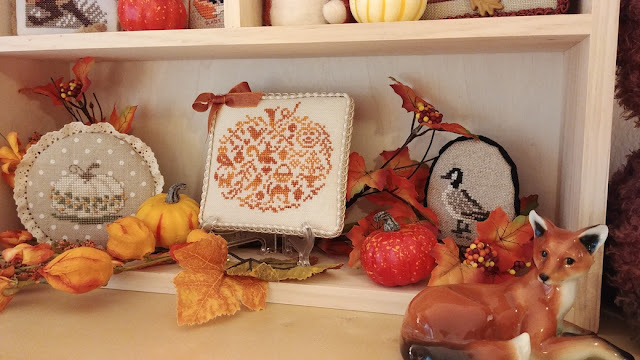 I want to fiddle with it a bit more and add a few things, but I've still gots lots of work to do and no time to play! Just wanted to share another idea for displaying smalls.

Have a good weekend, y'all!
Posted by Honeybee 16 comments:
Labels: fall, seasonal dollhouse

And *summer is over! More yay! Tiger Lily started blowing her summer coat in July. I suppose it's sort of "old-wives'-tale-ish" on my part, but I have noticed that when she loses her summer coat mid-way through, we get an early start on winter (which around here, is early December). Fine with me. I'm ready for a blizzard. 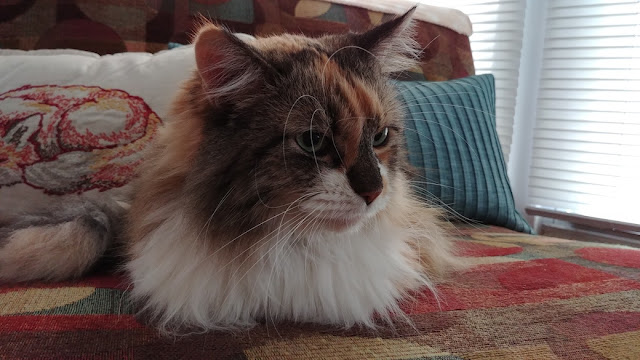 As I mentioned a few posts ago, I've been spending this summer doing some redecorating and cleaning out for a possible spring move. As is often the case, messing with any household project of any size can be like accidentally knocking over the first domino in the line, and then watching helplessly as the cascade of falling dominoes runs madly throughout the entire house. That's where I am right now. I was only re-doing the living room, but had to move some cabinets out, which required finding a place for them elsewhere, which ended up being my sewing room, which then required a major re-arrangement to accommodate them... you get the idea. I think I can finally see the light at the end of the tunnel, and none too soon. My stitching and blogging about stitching has been sadly neglected.

Mr. Wonderful's birthday was last month, and we did manage to get out for a little day trip to celebrate. I got this adorable 4.5" pitcher. In one of my earlier pottery posts, I was fussing about being nuts about pitchers but not really having much use for them. It was hard to justify buying them. Then I decided that loving them was all the justification that I needed, so here we are. Life's too short to deny yourself charming little pitchers. (If you want to see some of my other pieces, click on the "pottery" label at the end of this post or in the right sidebar.) 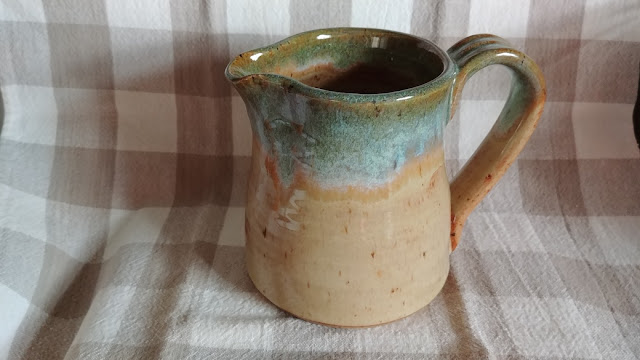 While we were out trekking the countryside, Mr. Wonderful survived a ferocious chicken attack! 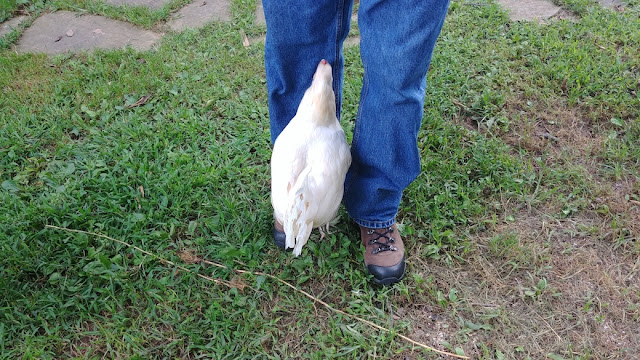 In the surest sign of fall, college football is back! Saturday we went to the Texas game (we are both Texas grads). Of course they lost. We still had a good time (except for the hour and a half rain delay), and we're both just killing time until hockey season starts anyway. 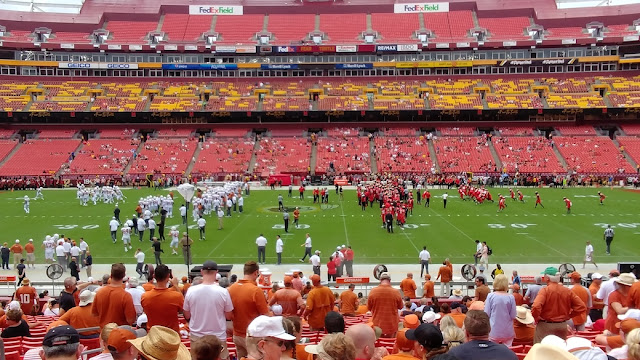 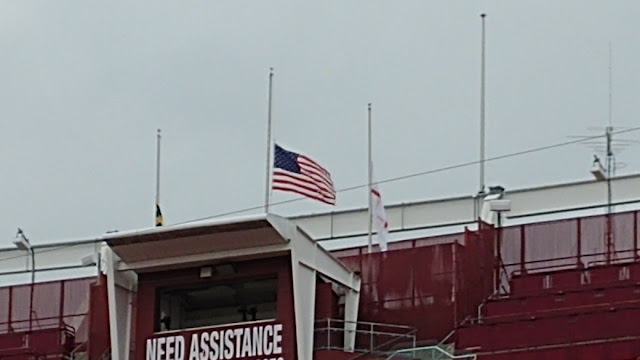 In my last Clover and Lace update I optimistically (and delusional-y) announced that I only had two more lines of verse and the border left and that I could probably finish it by the end of the summer. I knew--even as I was typing it--that I was kidding myself. With everything else going on in this house, I have managed to stitch exactly one, o-n-e, line of the verse. It's not even worth an update. However!

This! This is worth noting! Brooke Nolan has started a new six-part series: Woodland Santa & Friends, available in her Etsy shop. It is A-D-O-R-A-B-L-E. Parts 1-3 are out, and they are available separately or in a bundle. Part 1 is Santa, part 2 is Freddie Fox, and part 3 is Rebecca Rabbit, and y'all they have little outfits! So, so, SO cute! The morning they were released, my cousin texted me a picture and I immediately went out and got my supplies together (I was about to leave to run errands anyway, but you know, that went to the top of the to-do list.) 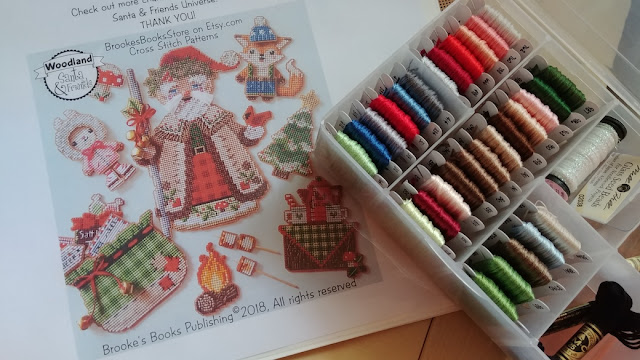 So that's where things stand at my house.

Oh, and Mr. Wonderful and I have another trip to Seagrove, NC planned for this month (see this post).

But I did get my blog updated! 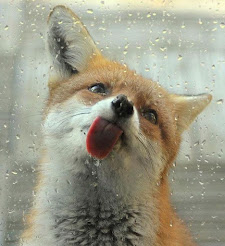 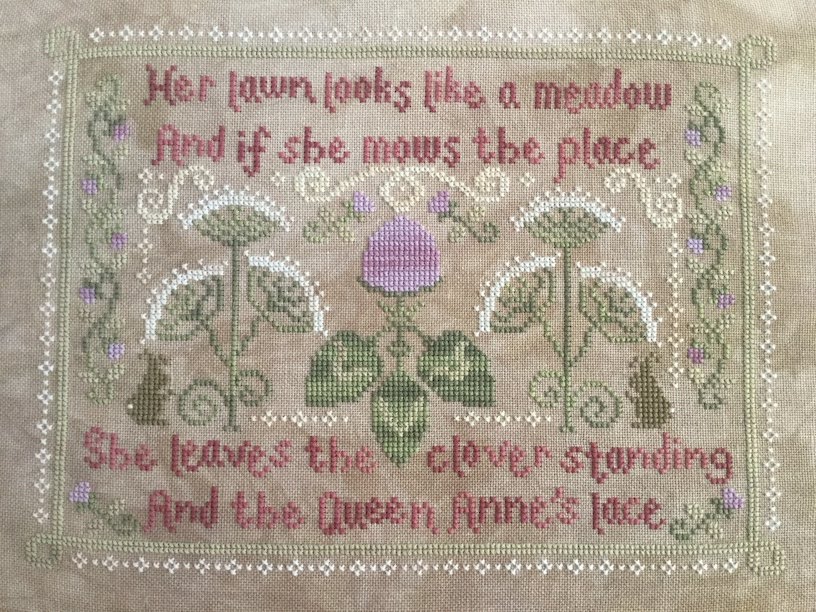 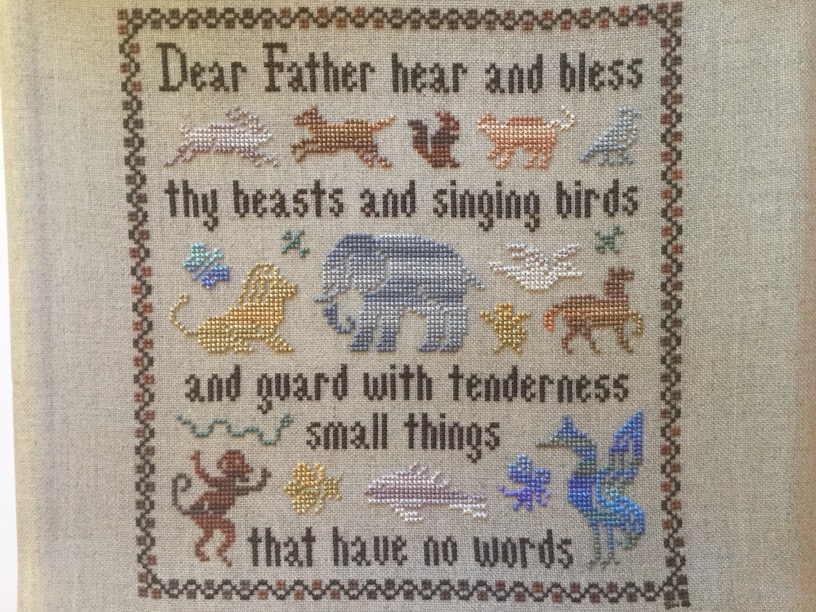 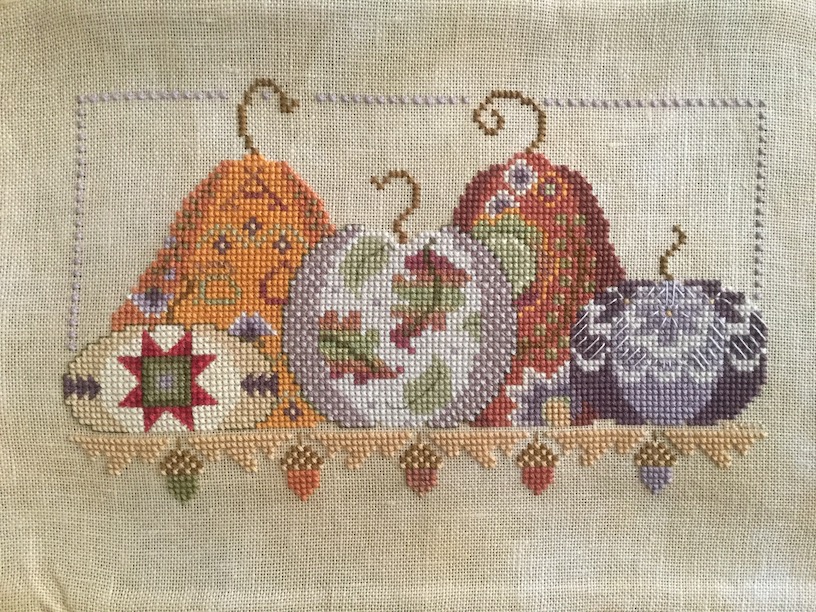 Cross Eyed Cricket's Playing with Jax, my own purple conversion 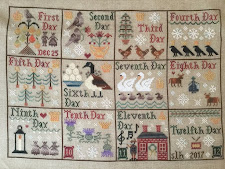 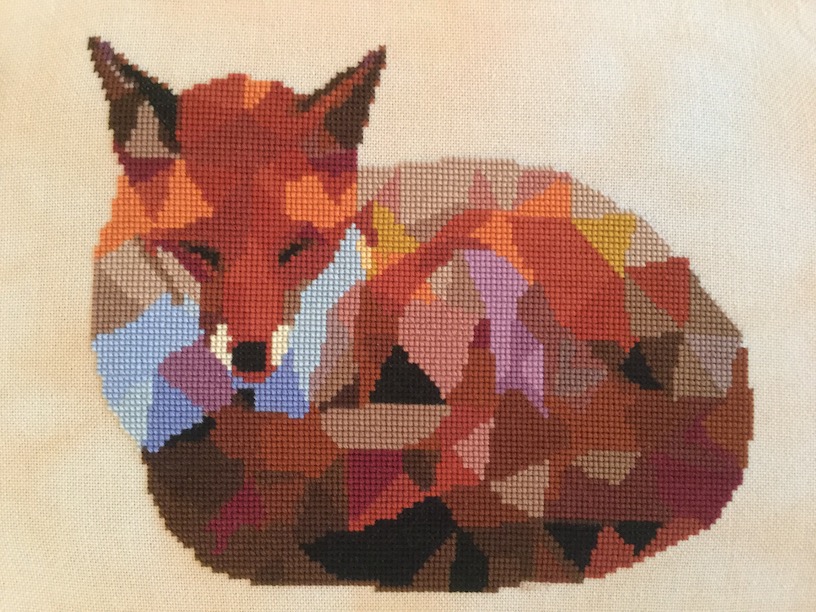 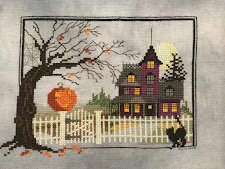 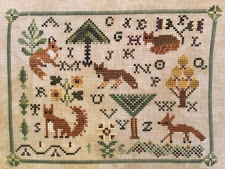 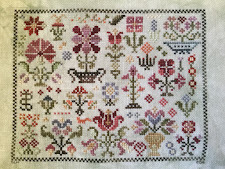 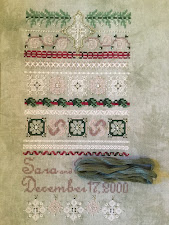 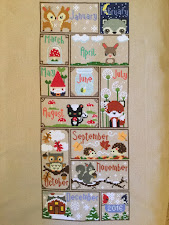 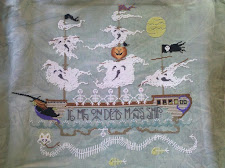